I was lucky enough to take part in the first ever 242 km Wadi Rum Ultra-marathon in September 2016. After 29 hours and 36 minutes of running over 5 days, I crossed the finish line in second place with the most enormous smile on my face having had one of the best experiences of my life!! It was so totally worth the training, pain, expense, time and commitment.

Here is a short video I put together to give you a flavour:

Background to the race

The race is set in the Wadi Rum Desert, a 278 sq mile sun scorched expanse situated in the south-western corner of Jordan, around a 4 hour drive from the capital city Amman. It is a 5 day event through the most stunning but unforgiving backdrop. There were just 7 competitors in total taking part, so it was a really intimate and friendly race, and this for me was without doubt one of the best aspects. The longest day was a gruelling 70km stage through soft sand, taking around 10 hours to complete with temperatures reaching around 40 degrees celsius – the stage was set for an unforgettable week!!

We lined up on the start line on a rather chilly Monday morning at 5am, the beginnings of dawn happening. All bar one of us had very little race experience of any description! There was one competitor who clearly stood out from the rest of us amateurs; namely the fantastic and legendary Jordanian ultra runner Salameh El Aqra, whose Marathon des Sables accolades include coming runner up in the  8 times, and winning it in 2012!! It was a real privilege lining up with him on the start line, albeit it did make us feel pretty inadequate and ill prepared! 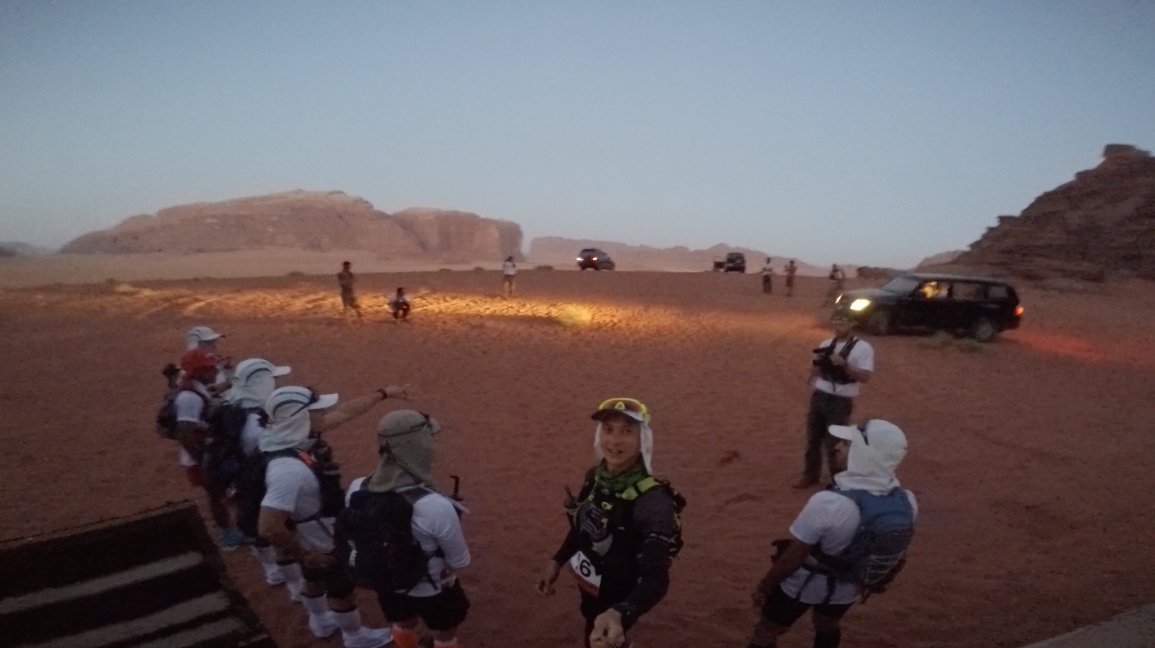 The starter horn went and we all trotted off on day 1. The picture above at the start line from my GoPro moments before we set off!  My water bottle (admittedly, untried and tested, mistake number one!), started leaking immediately, but fortunately there weren’t too many more kit malfunctions to come!

Having never competed in any form of multi day ultra marathon before I was unsure of my limits, and the last thing I wanted to do was to bolt out of the starting blocks and then have to pull out on Day 3 from bad blisters, dehydration or exhaustion. To my benefit was rowing the Atlantic 3 years ago, so from this I knew that pacing and looking after even the smallest niggle is of paramount importance. But now having completed this ultra, I have much a better understanding of my capability and all those elements involved with a desert ultra marathon, and I probably would be slightly more aggressive on my pacing next time.

Above: Me running along side Salameh El Aqra (2012 MdS winner), that was a real honour and one of the highlights of the race for me. I managed a couple of full 10km legs with him (running at 6min km pace), but I couldn’t sustain that for too long ..!!

What is the Wadi Rum Ultra comprised of?

So it’s a five-day event, totalling 242km, comprised of the following stages: Day 1 50km, Day 2 70km, Day 3 50km, Day 4 42km and Day 5 30km. It was actually meant to be 300km (including a 100km day) but after two of the competitors ended up having to drop out from salt loss and dehydration, the race organiser took the decision it was best for all involved to reduce Day 4 from 100km down to a marathon (42km) to make sure nothing more serious happened to anyone. Even Salameh (the MdS winner) backed this, as he too was finding the conditions quite tough.  We would start each day very early to avoid as much of the heat of the day as possible, with the longest day (the 70km), starting at 3am, meaning three hours of running in the dark with head torches and glow sticks – this was super cool, the stars were phenomenal!! But even then by around 10.30am, you’d really start to feel the heat.

Each morning, the course is made by local Bedouin guides who go ahead in a 4×4 and put little flags marking the route every 30m or so for the competitors to follow. Sometimes you would be in a day dream and suddenly realise you hadn’t been keeping an eye out for the flags and that you’d lost them. This happened to me a couple of times, and believe you don’t want to spend an extra minute running than you have to, so this was infuriating and you’d get really annoyed at yourself!! Every 10km of the stage (between 1 hour and 1 hour 45mins of running), there would be a checkpoint, where the race organisers would have a vehicle, check you were OK, and top you up with water, and off you’d go. We would typically be finished by around 2 pm each day, so then we would try to stay off our feet as much as possible, and recover, eat and re-hydrate. You can do all the training you wish, but if you’re not replacing lost salts and re-fuelling, you could find yourself in some trouble! 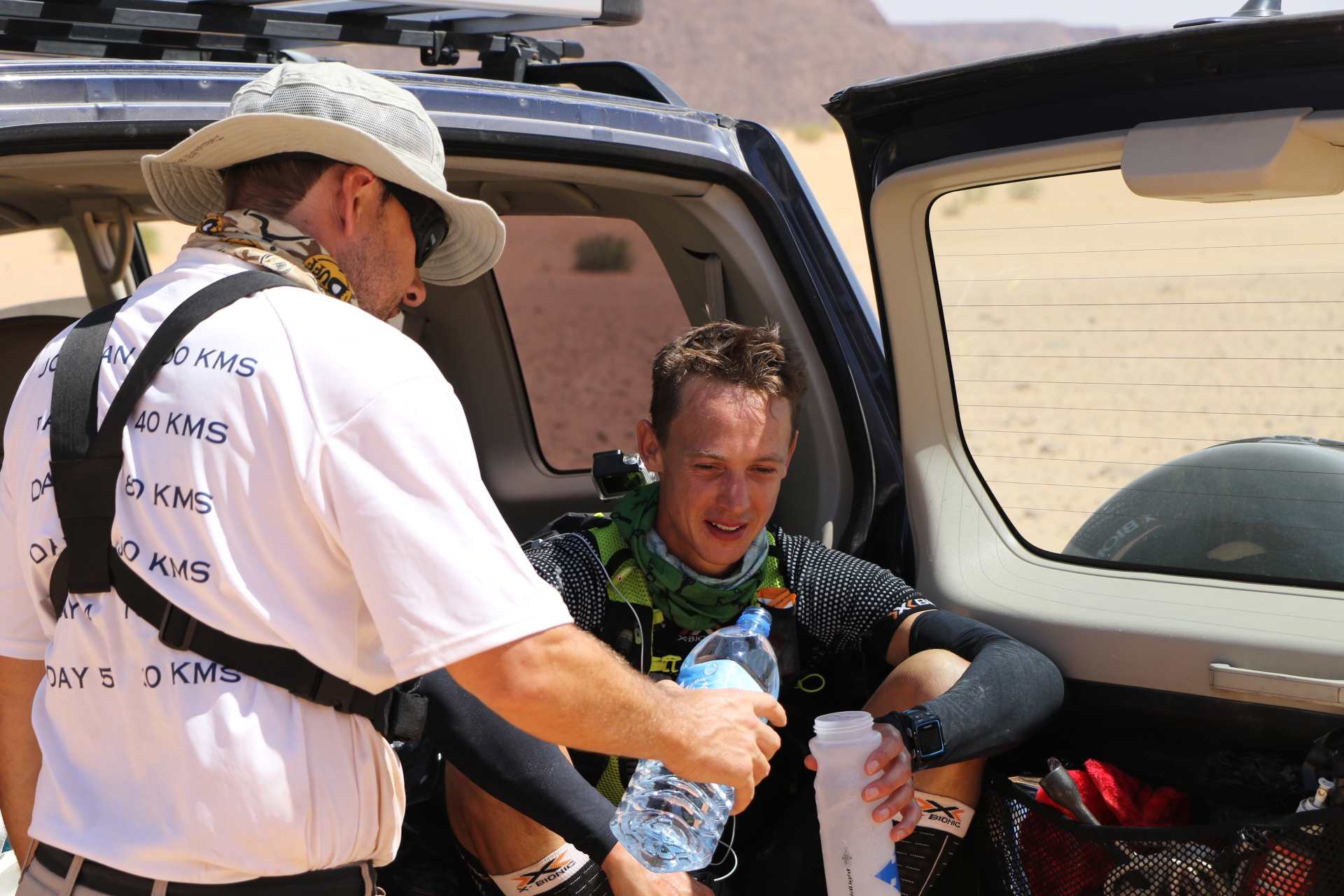 Above: Lee Fudge, the Safety Officer, topping my bottle up whilst I take a moment’s rest!

Conditions on the whole were quite favourable, other than it being very hot, I would say into the mid 30s. There was no particularly adverse wind. One of the days had very soft sand, and this was so very draining. On the 70km day, I was feeling right as rain at the 60km checkpoint, but the last 10km (in the hottest part of the day, around 1 pm) suddenly hit me hard, the sad was super soft, and I walked a considerable amount of this – it was tough! This was a particular lesson that respect for a challenge and a location like this was not to be underestimated at any moment, On Day 4, the 42km day, the surface was almost entirely baked hard salt flat, akin to running on tarmac, this was quite hard on the joints.

What kind of training was I doing  beforehand to make sure I was prepared as I could be?

I firmly committed to the race only around two and a half months before it, around mid June, so my preparation was by no means textbook! I had a good base level of fitness to build from though – probably at around 3:15 marathon level at the point I signed up – and my focus was then to start upping the mileage from my usual 10-20km runs ASAP! Over the months of July and August (the race being the beginning of September), I would be clocking a minimum of 100km per week. This would be comprised of running both before and after work 6 days a week. My peak week was at the beginning of August totalling 175km, including my longest training run of 60km. It was a complete change in mindset for marathon training, which was a lot of tempo and speed work. This was all about getting as many hours on the feet as possible, even if some of it was walking. 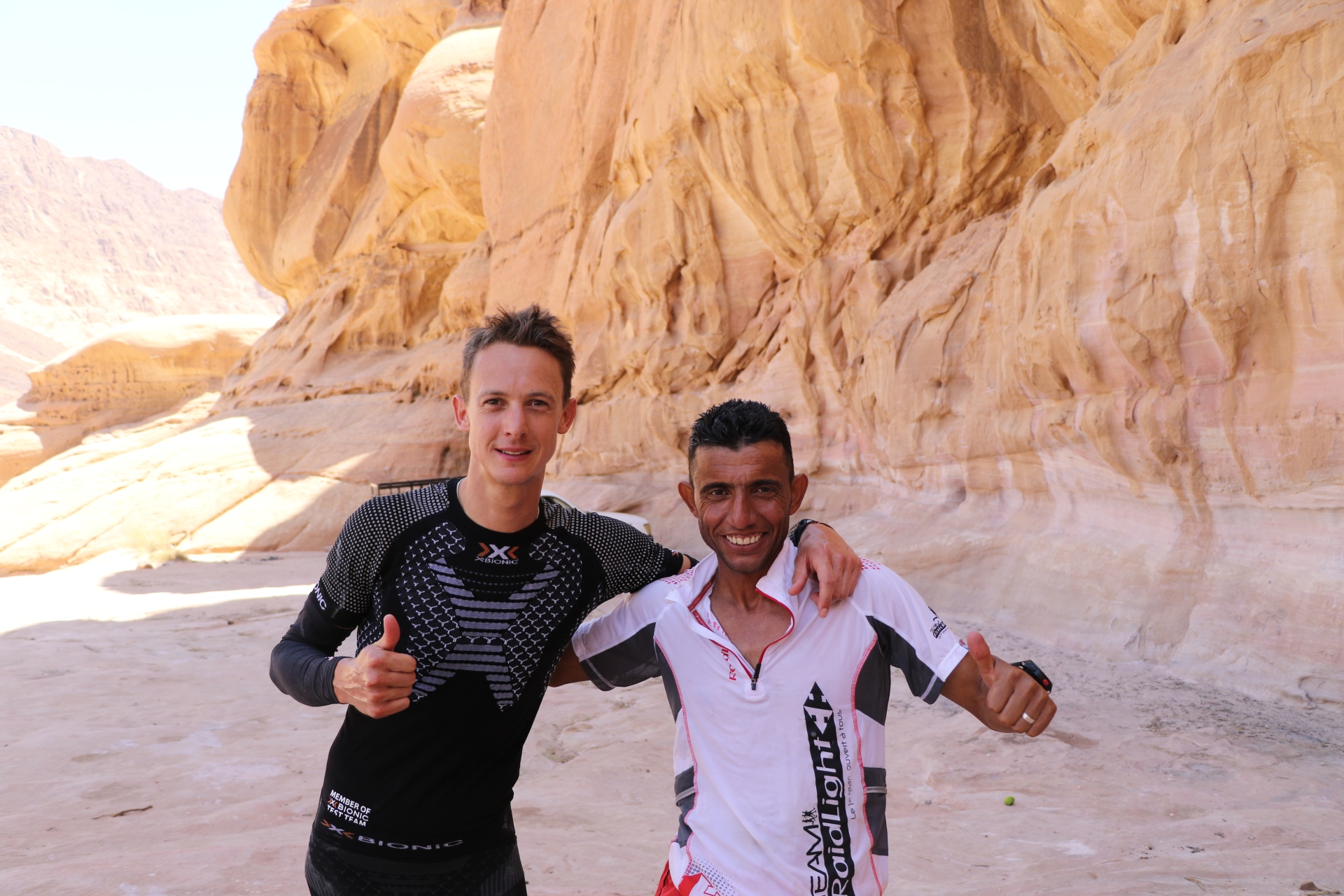 Above: Here are Salameh and I at the end of Day 2 taking some much welcome shade! This was a brutal 70km stage, taking 9hrs 42mins.

What kit was I carrying with me for the day? Did all of it perform well?

We actually only had to carry what we needed for the day’s running, so unlike Marathon des Sables and some other ultras, we didn’t have to carry all our food and sleeping equipment. This no doubt made life much easier and meant we just had a small mandatory kit list (first aid kit, compass, windproof jacket for example), and food, gels and bars for the day, and that was all. So, fully loaded for the day with water (2.5litres) I would imagine the pack weighed in at around 4 – 5 kgs.

Footwear-wise, after much deliberation I opted for New Balance Leadvilles, which were just fantastic. While other competitors were hobbling around and visiting the doctor each night with blisters, my feet were in prime condition and were perfect! You’ll note we have gaiters affixed to the trainer to keep the sand out – these work very effectively. 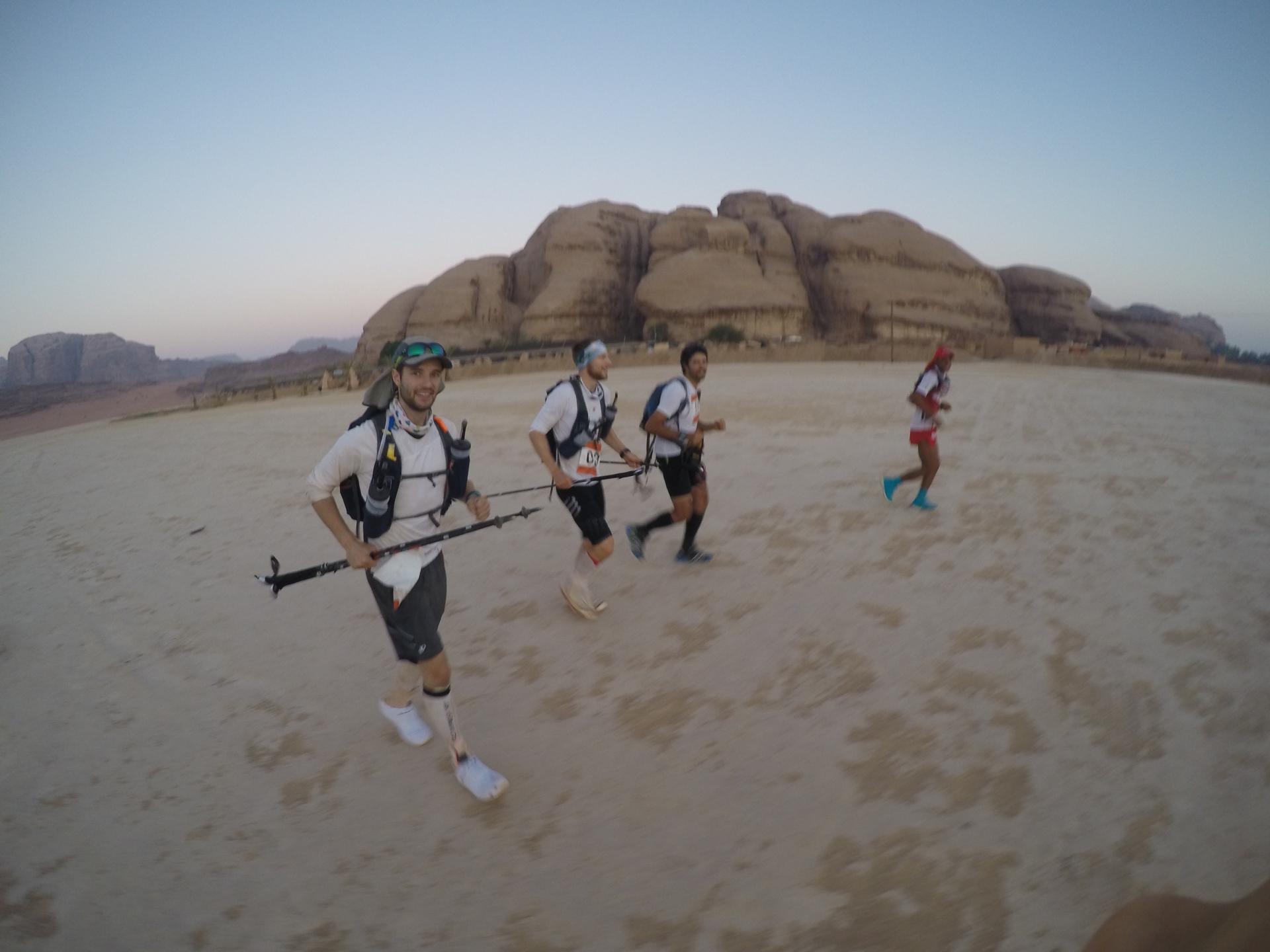 Did I do anything with a charity?

Yes, with the support of my wonderful friends and family, I raised £2,565 for British Exploring, which is a brilliant youth development charity called the British Exploring Society. They work with young adults from all backgrounds aged between 16-25 and take them on challenging expeditions to remote, wilderness environments (such as the Amazon, Himalayas, Africa, the Yukon) to develop the next generation’s confidence, teamwork, leadership and spirit of adventure. As well as this, they also run several outreach programmes for some of the most deprived people in the UK. It’s a great cause.

Would I do it again?

In the blink of an eye I would do it again. No hesitation whatsoever. I intend to be back there this October for the next one, and I am eyeing some other ultra marathons, both home and abroad, in the meantime .. bring on the adventures of 2017 …!!!

Above: Moments after we had all crossed the finish line, this request by the photographer for us all to ‘jump’ wasn’t most welcome!! Competitors: David Radcliffe, Zander Whitehurst, James Whitehurst, Alexander Spencer, Salameh Al Aqra and Mohsen. Organiser: Jamie Sparks, ‘Great Michael’ and Lee Fudge.

The next Wadi Rum Ultra starts on the 7th October 2017 with a total distance of 260km over 5 days. The entry price is a bargain £750, and I would highly recommend this if you were thinking of a challenge for 2017..!!

You can view my short YouTube movie of the run by clicking here. 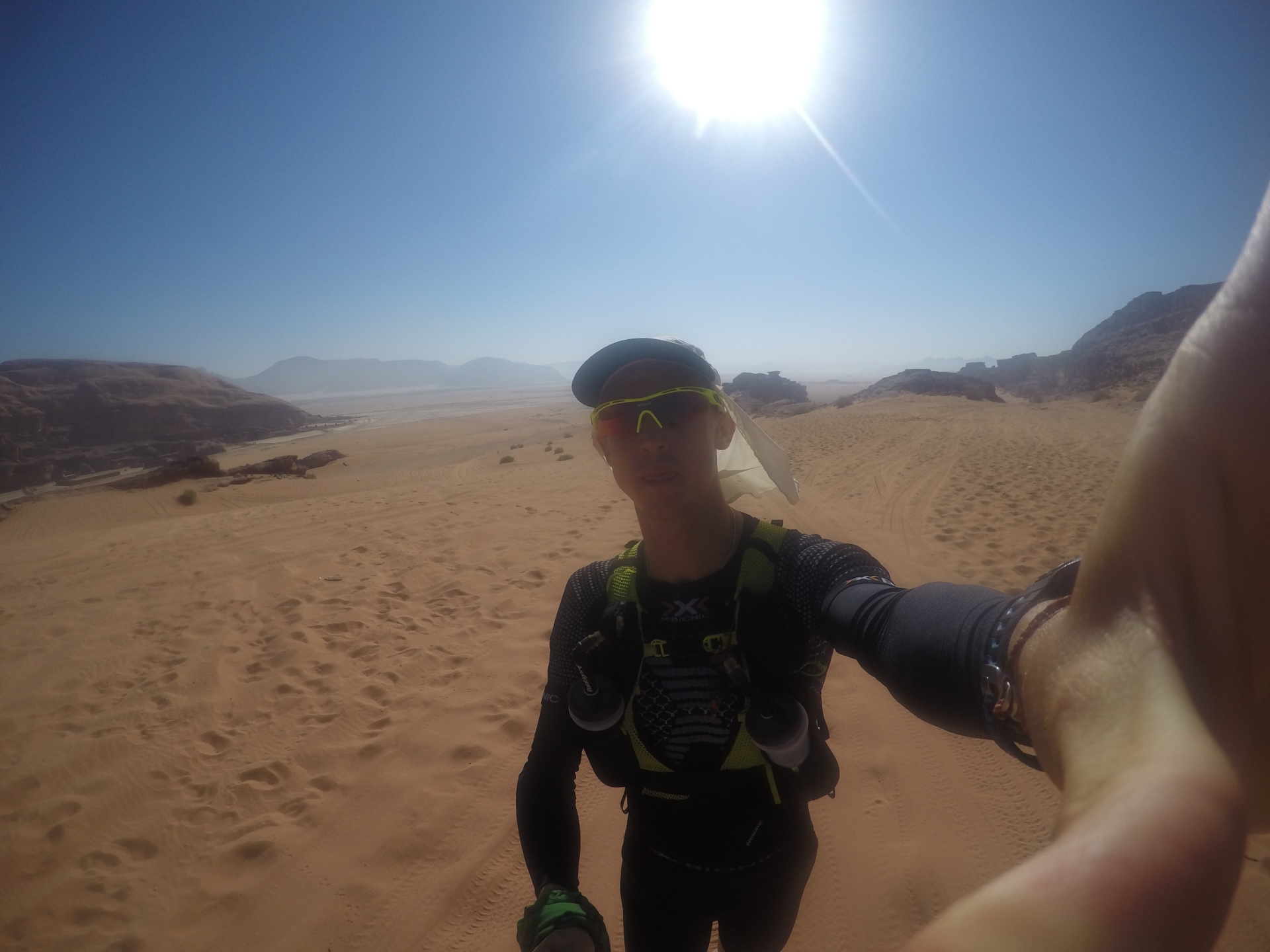